1. Soak the gelatine in cold water.

3. When the mixture is cool and about ready to set, fold in the whipped cream and pour on top of the dariole mould and set completely.

4. To de-mould the bavarois dip the mould in hot water and loosen edges before turning out decorate with cream and fruits.

Mix the Maltodextrin and Gellan gun together then using a hand blender mix well into the liquor, put in a pan and cook out until clear, pour onto a plate and cool and put in fridge to set before cutting into shapes.

Mix the sugar and Sodium alginate together and slowly add to the poaching liquid on a machine at slow speed continue to mix for 5 minutes, then rest for another 5minutes before using.

Using a syringe drop droplets of the mixture into the calcium bath mix a little and allow to sit for 3 mins to form balls, before removing and raising in cold water. They are now ready to serve. 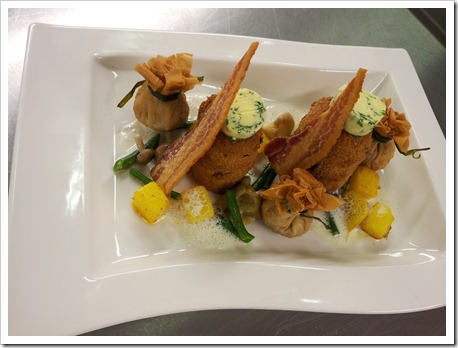 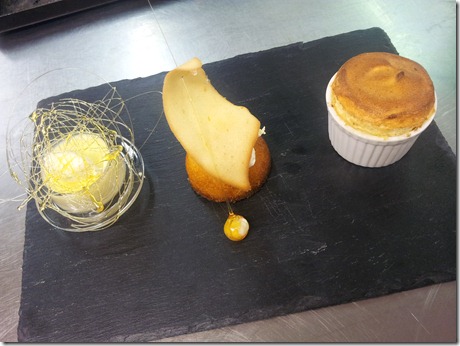 1. Preheat the oven to about 170c or gas equivalent

2. Grease and line an 8 inch round cake tin

3. In a bowl beat the butter and sugar until light and fluffy

4. Add in the eggs one by one - beat well adding in a small amount of ground almonds if mixture starts to curdle

5. Add in the remaining ground almonds and again beat well

6. Stir in the polenta and baking powder

7. Grate in the zest of one of the lemons and the juice of half a lemon.

8. Mix well and then scrape the mixture into your prepared tin. Bake on the middle shelf of the oven for between 45 minutes to an hour - check to make sure a skewer comes out clean when inserted into the cake.

9. While the cake is cooking, grate the rind off two lemons and extract the juice from the remaining three and a half lemons.

10. Place the rind and the juice in a small saucepan with the 6 tablespoons of sugar.

11. Stir to combine and then heat over a gentle heat until the sugar has dissolved

12. When the cake is cooked, remove it from the oven and prick all over with a skewer - immediately pour the lemon syrup over the cake and let it soak it. It will seem like there is a lot, but it will all soak in!!

13. Leave to cool in the tin, then remove and wrap in foil until needed. This cake will keep ok for a few days - but surprisingly will freeze very well even with the syrup in it - and is divine warmed up in the microwave for a few seconds... 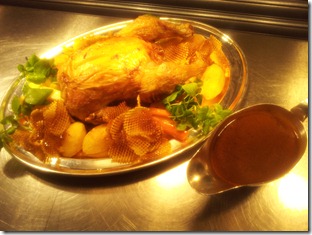 1. Season the chicken inside and out with Salt and Pepper.

2. Place on its side in a roasting tin.

3. Cover with Dripping, Butter or Margarine.

8. To test if cooked pierce with a fork between the

Drumstick and Thigh and hold over a plate. The juice

issueing from the chicken should not show any signs

1. Place the roasting tray on the stove over a gently heat to allow the sediment to settle.

2. Carefully strain off the fat, leaving the sediment in the tray.

3. Return to the stove and brown carefully, Swill (Deglace) with a good brown stock.

4. Allow to simmer for a few minutes.

5. Correct the seasoning and colour. Then strain and skim.

In some establishments the gravy served the stuffed joints and also pork and veal is slightly thickened with diluted corn flour, fécule or arrowroot. 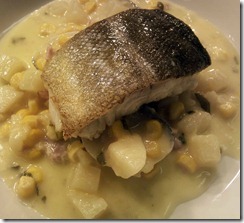 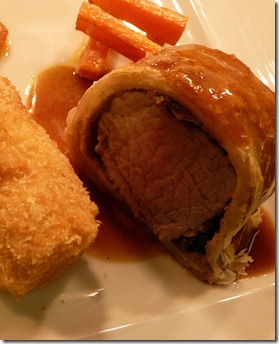 1 tbsp. chopped mixed herbs , such as chervil, chives and tarragon

To make the crêpes, whizz the flour, egg and milk with a pinch of salt in a blender or processor until smooth. Pour into a jug and stir in the herbs and some seasoning. Leave to rest.

Fry the mushrooms in a little oil until they give up all their moisture and it has evaporated, leaving you with a thick paste. Add the thyme leaves and some seasoning and keep cooking for a few minutes. Cool.

Stir the melted butter into the crêpe batter, heat a 15cm crêpe pan and oil it lightly. Pour in enough batter to make a thin layer on the base of the pan, cook until the top surface sets and then turn over and cook briefly. Remove and repeat with the rest of the batter. This will make a couple more than you need so choose the thinnest ones for the recipe.

Sear the pork all over in a little oil in a very hot pan. Brush with the mustard, season and allow to cool.

Lay a large sheet of cling film on a kitchen surface and put two crêpes down on it, overlapping a little. Lay over the Parma ham. Spread the mushroom mixture over the ham and put the beef in the centre. Roll the cling film up, taking the crêpe with it, to wrap the pork completely into a nice neat log. Chill for 1 hour.

Heat the oven to 200C/fan 180C/gas 4. Roll out the pastry, remove the cling film and wrap the pork in the pastry like a parcel, with the ends tucked under. Trim to keep it nice and neat. Brush with egg, score with shallow lines across the top and chill for 20 minutes.

Cook for 40 minutes. The best way to test if the meat is done to your liking is to neatly and carefully stick a skewer into the pork, count to three and then test it against your inner wrist. If it is cold the beef will be raw, if it is warm then the beef will be rare and if it's hot, it'll be cooked through. Leave to rest for 10 minutes before carving. 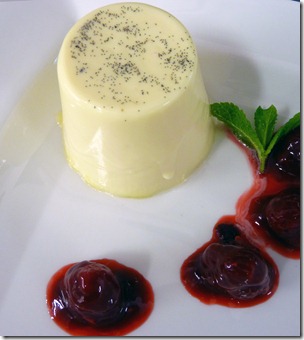 Email ThisBlogThis!Share to TwitterShare to FacebookShare to Pinterest
Labels: Vanilla Pannacotta
Older Posts Home
Subscribe to: Posts (Atom)
These recipes and pictures are of food produced by my students and Nelson and Colne College, and can be tried in our college Restuarant.